skip to main | skip to sidebar

Plateau State High Court 7 has sentenced five persons to death by hanging for killing an old woman tagged a witch.
The convicts had accused the deceased of being behind some of the mysterious happenings at Kwogu village in Riyom local government area.
The victim Mama Lyop Badung was beaten to death, while the girl who was said to have died of witchcraft was Rachael Yohann.
The accused persons were sentenced on two count charges of criminal conspiracy and culpable homicide.The convicted persons are Yohanna Davou, John Davou, Pam Davou, Pam Dalyop and one other.
Justice Christine Dabup on Tuesday said the witnesses called to testify in the case did not contradict themselves in their evidence and that the prosecution proved its case beyond reasonable doubt, while the police did not fail in their responsibility.
Having listened to the counsels of all the parties, with their final written addresses adopted, Justice Christine Dabup, sentenced the accused persons to death by hanging without any option.
After the judgment, the prosecuting counsel agreed that it was barbaric to kill a human being on accusation of witchcraft.
http://dailypost.ng/2017/05/24/plateau-court-sentences-5-death-killing-witch/
Posted by Prof. Adeyemi J. Ademowo at 11:50 PM 1 comment:

As part of the efforts to promote peace and advance social tolerance in Omuo-Ekiti and its environs, the Humanist Association for Peace and Social Tolerance Advancement (HAPSTA), on Wednesday 17th September 2014, paid courtesy visits to divisional headquarters of the Nigerian Police Force.

HAPSTA Board decided, during the 2014 2nd Quarter Project Review, that there is need to strengthen relationship with the security operatives in the Ekiti area so as to involve them more and enjoy their goodwill in the fight against the menace of witch killing, rape and other forms of jungle justice bedeviling the project area. During the meetings with the Divisional Police Officers, HAPSTA’s Admin/Accounts Manager, Seun Joseph emphasised the need to have the support of the Nigerian Police in the fight against the witch hunters and molesters/abusers who often carry out their activities unhindered because of the superstitious belief s of the people and also that of the security operatives. He cited the case of Grace Audu and two other cases where the police were accussed of being party to the assault of the women. 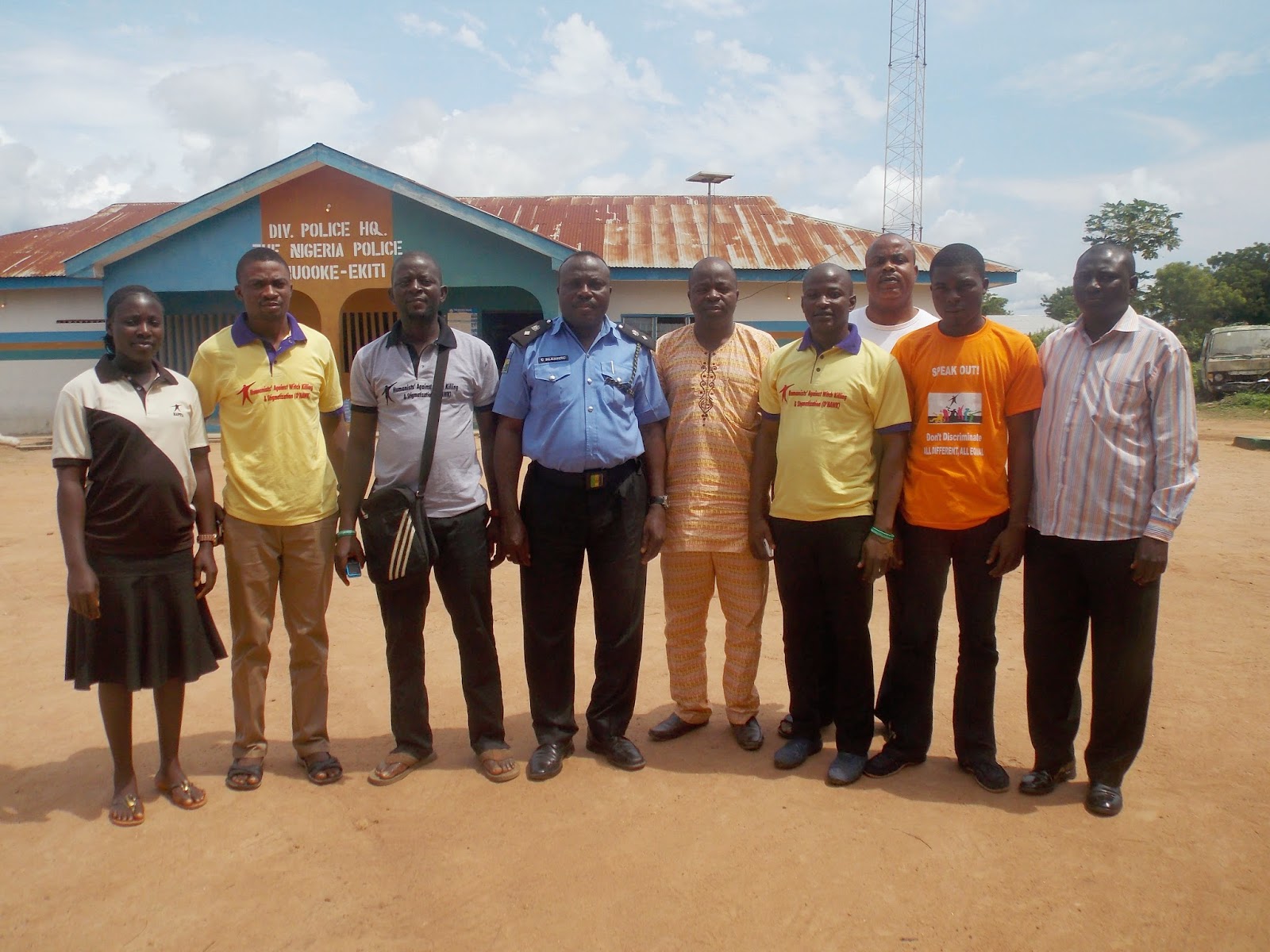 In his own remarks, Kehinde B. F, the DPO of Omuo divisional police headquarters reassured HAPSTA of his support for HAPSTA/ Humanist Against Witch Killing project (O’HAWK), and that the Police, under his command, will continue to do their best in ensuring that Ekiti is rid of witch hunting and stigmatization, jungle justice, rape and other vices. 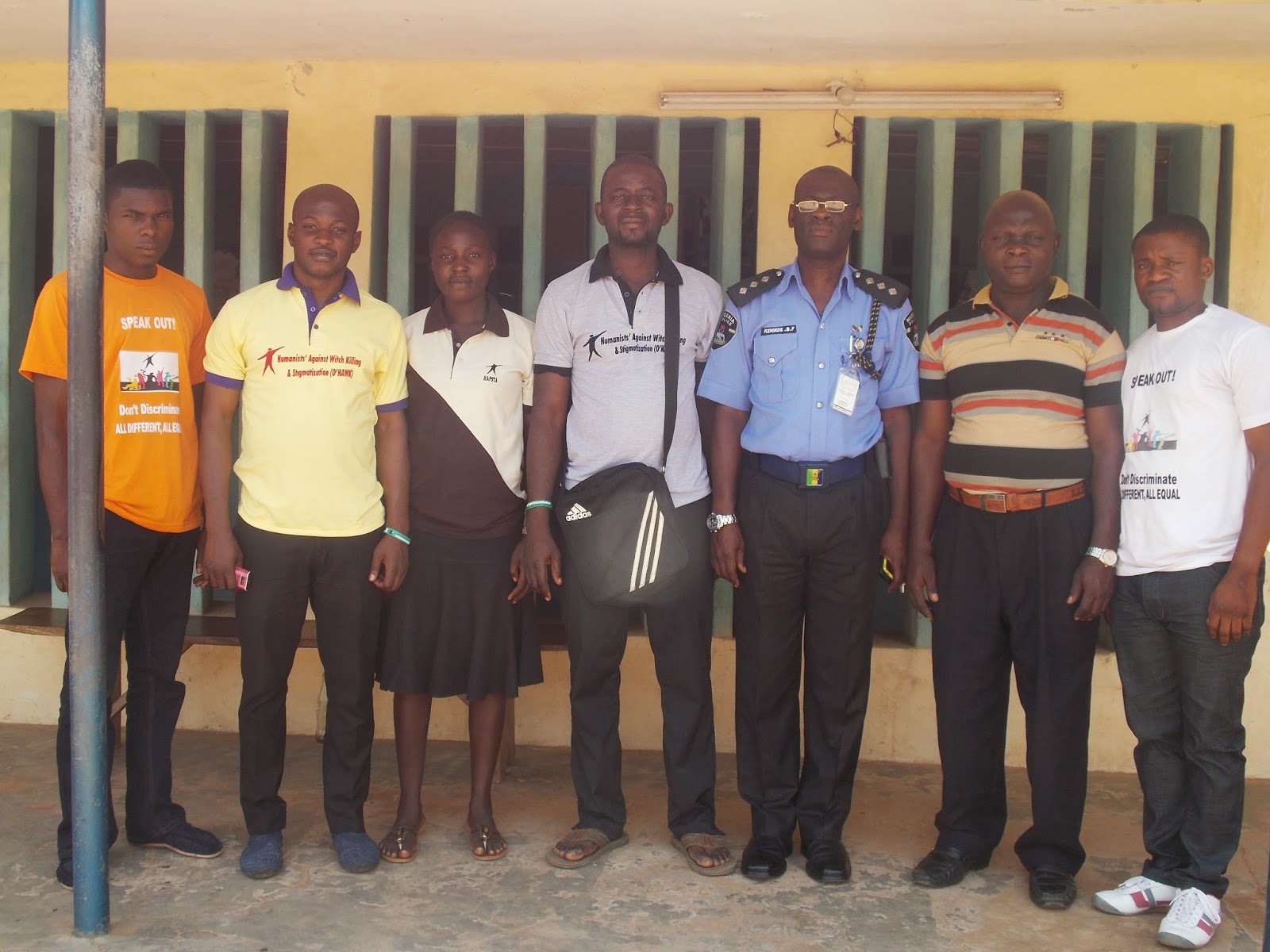 Another DPO visited, Gottoh Blessing, the DPO of Omuooke divisional police headquarters, also pledged his support for HAPSTA/O’HAWK project; noting that we should not relent in our activities and hope that someday, the government would reason with us and lend us the required supports.

Noah Balogun
Posted by Prof. Adeyemi J. Ademowo at 7:56 AM No comments:

On Thursday 18th September 2014, the Humanist Association for Peace and Social Tolerance Advancement (HAPSTA) took yet another giant step in advocating against witch stigmatisation as we hold an anti-witch stigmatization rally/road show across eight towns in Ekiti State, Nigeria. Eight towns were purposively selected to cover the endemic areas of Ekiti where superstitions and witch stigmatisation still hold sway. These towns include Igbesi, Kota, Obadore-Omuo, Araromi-Oke, Ikun oba and Ilasa. 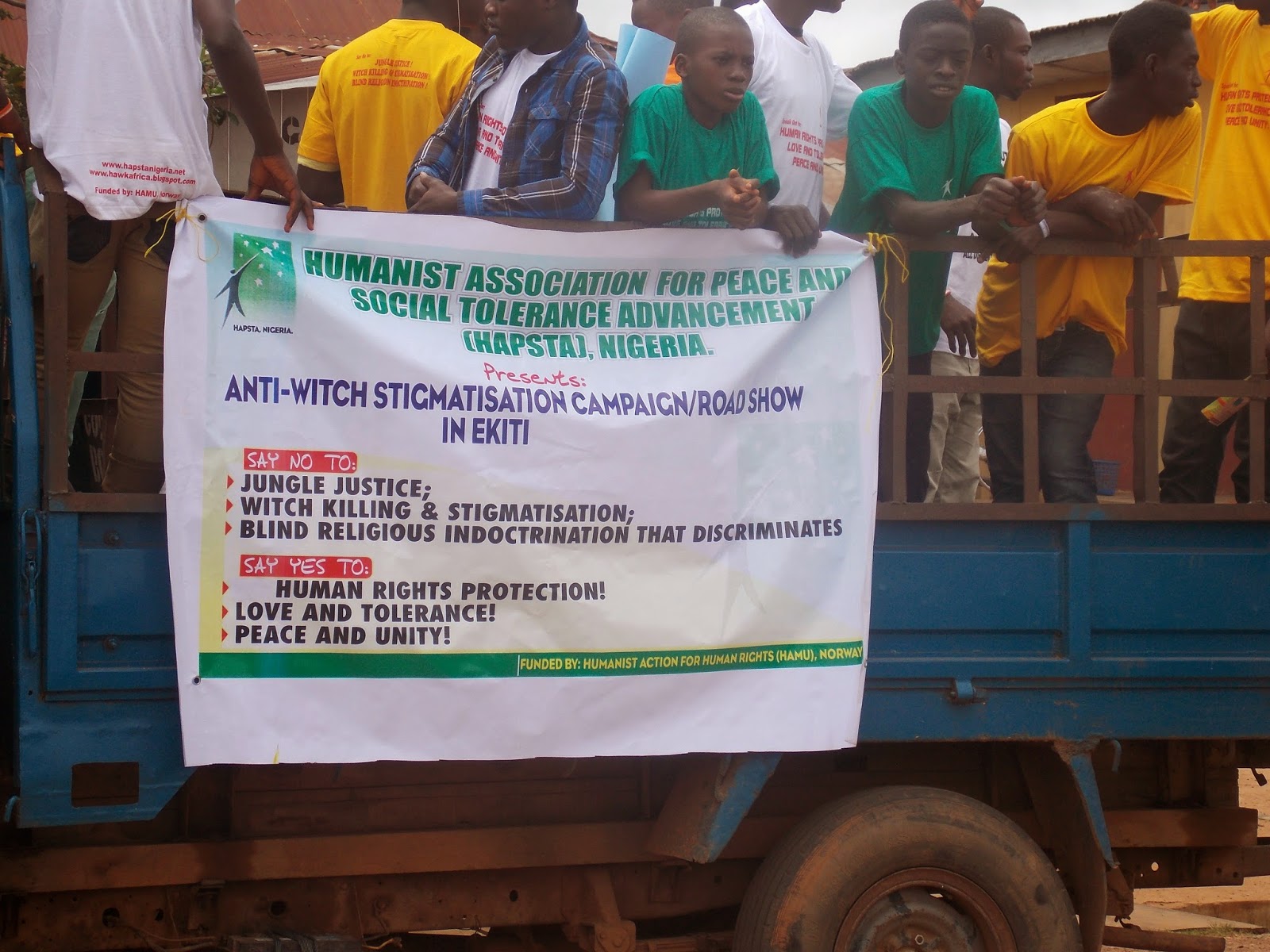 The rally is predicated on HAPSTA’s quest to further win the war against superstitions and blind religious indoctrination which have continued to serve as impetus for witch killing/stigmatization, ritual killing as well as jungle justice related issues such as bullying, child labour and the prevalence of rape in these towns.

The rally which started during the early hour of the day had about a hundred and three participants who are mostly our volunteers. At about a quarter past ten in the morning (10:15am), the participants gathered at the Ejire Town Hall where we discussed issues bothering on the security of lives and properties of our people. We therefore came to a conclusion that superstition remains the chief reason for the prevalence of witch killing in Omuo-Ekiti and its neighbouring towns. 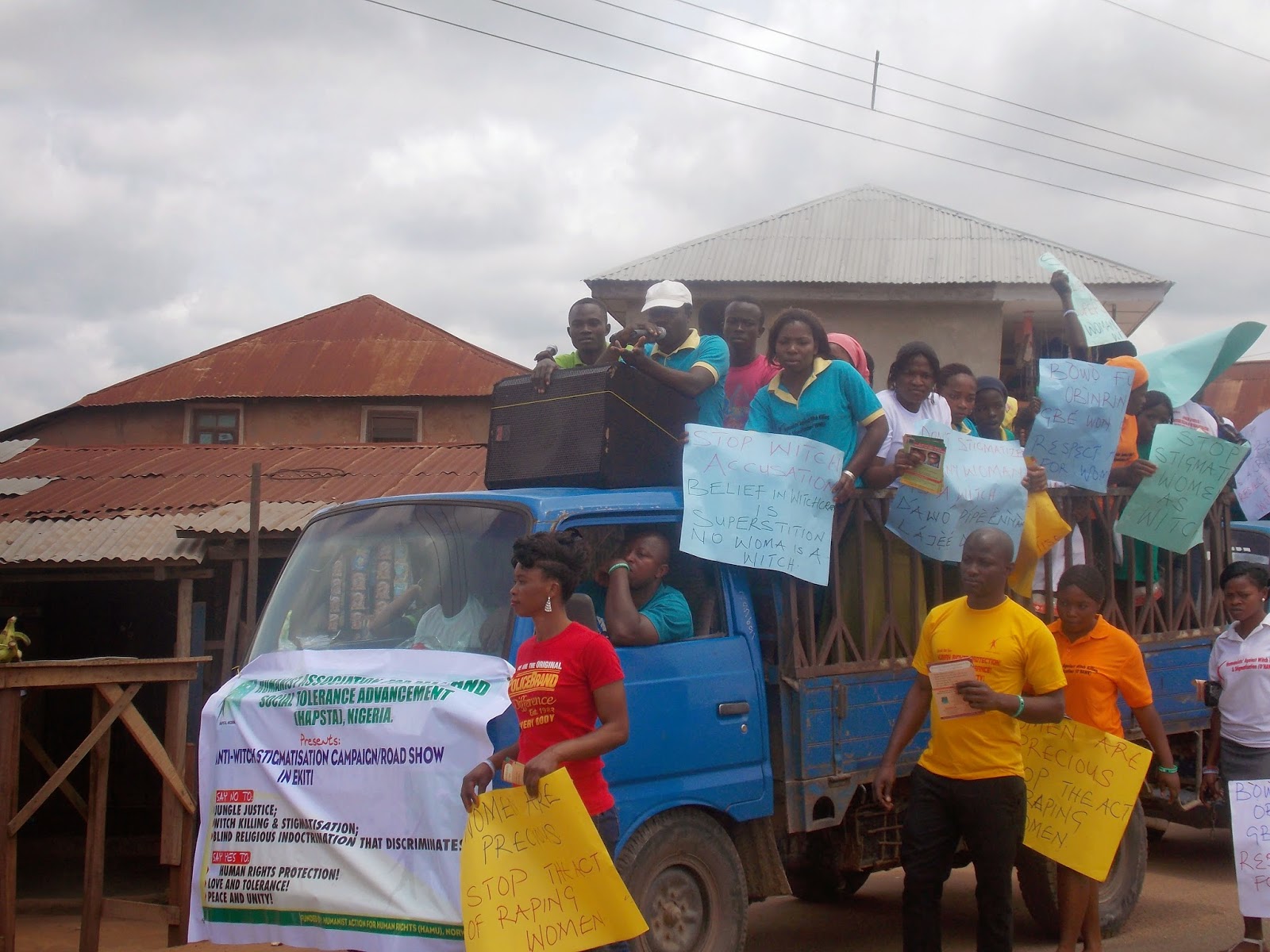 We moved on to agree to spend the day to enlighten our people about the evils of blind religious indoctrination and superstitions on our communal wellbeing and existence. We also agreed to make the people of Ekiti aware of the laws that are in place to guard against violation of individual human rights; and that of the penalties that would be meted against anybody found culpable of the offenses against these fundamental human rights. 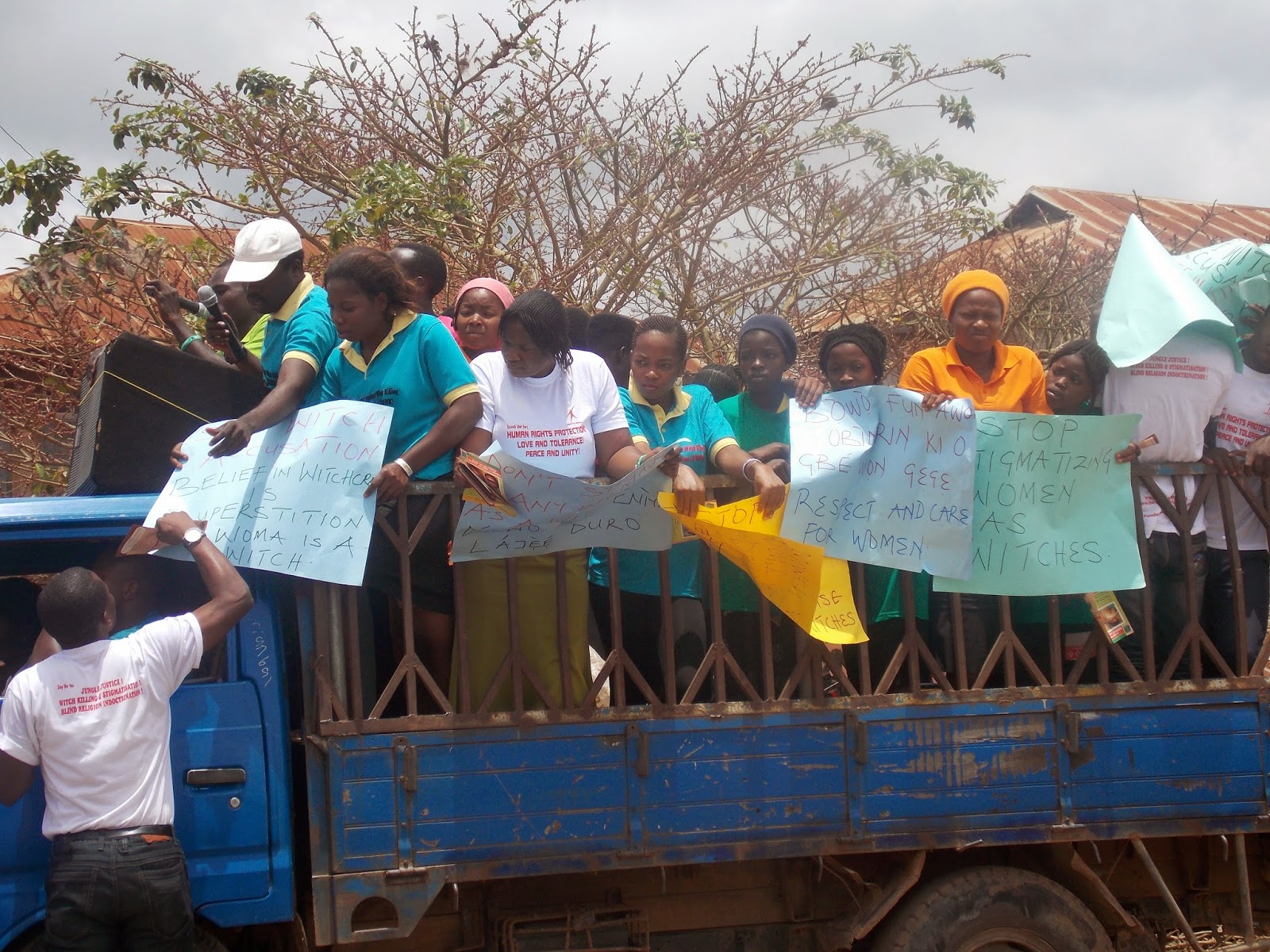 Throughout the rally, the enlightenment campaign was particularly anchored by Ayobami Ojedokun and myself, Noah Balogun. We both spoke blatantly against the barbaric practice of witch stigmatization/killing, noting that it is an act of sheer wickedness against our mothers, our wives and our daughters. We raise caution that henceforth, anybody found culpable of this offence will not go scot-free. 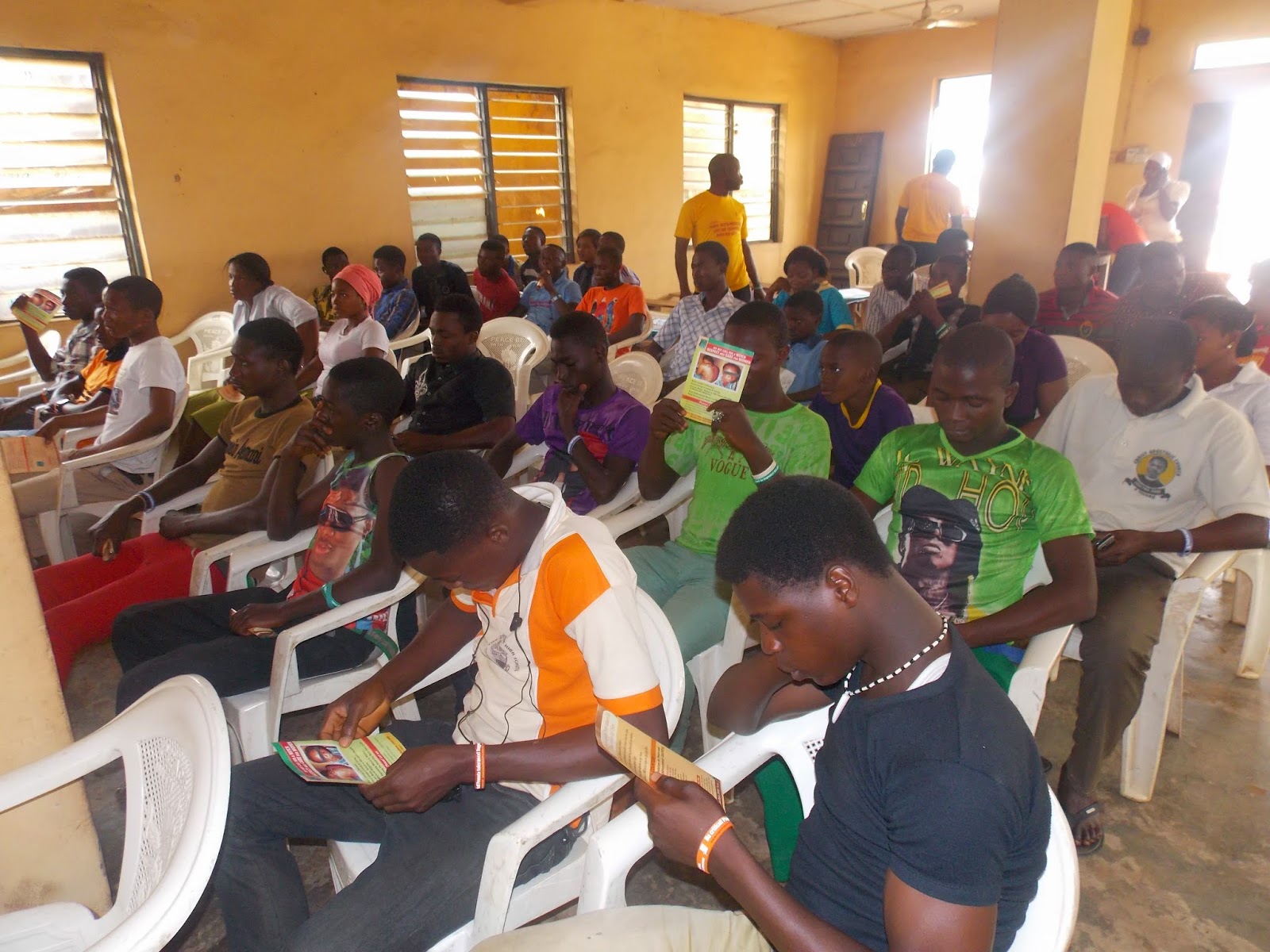 On getting back to the departure point at Ejire Hall in Omuooke, Oluwaseun Joseph and Oluwasanmi Adeyanju appreciated the volunteers for the support and encouragement we have enjoyed from the volunteers, noting that we are partners in the fight against witch stigmatisation/killing and all forms of unhealthy superstition standing as cog in the wheel of peace attainment in Ekiti and Nigeria at large. The volunteers, represented by Tunde Ojo, gave kudos to HAMU, Norway for supporting the OHAWK Project financially since 2013.

Noah Balogun
Posted by Prof. Adeyemi J. Ademowo at 7:24 AM No comments:

As part of our efforts to advocate against superstition, promote peace, justice and social tolerance and development, the Humanist Association for Peace and Social Tolerance Advancement (HAPSTA) on Friday 29th August 2014, holds its 4th international conference in honour of late Prof. Olusegun Oladipo, a quintessential scholar and a humanist of international repute.


The conference had as its theme, “Humanism, Existential Predicaments and Africa”, affords the participants the opportunity to discuss superstition, which has continued to bedevil Africa despite the growth of science and technology, in the modern world, social reconstruction, communalism, religious profiteering, witchcraft, modernity, among other issues.
The preference for the choice of the topic and the setting is predicated on the prevalence of the instances of superstition and its induced ilks such as witch-killing, ritual killing, and commonplace discrimination against religious minorities and the killing of albinos in contemporary Africa.

The conference which started at 9:30am, as scheduled, had 105 participants in attendance among whom are scholars and other eminent personalities such as Prof. Tunde Lawuyi, who delivered the Keynote Address, Prof. Wale Olajide,  who delivered the Welcome Address;  Dr. C. A Udefi who chaired the opening session of the conference, Prof. Francis Offor who declared the conference opened, Dele danladi Agbeyo (an eminent humanist), Prof. Dipo Irele ,  Dr. Bolatito Lanre-Abass, Dr. Christopher Agulanna, Dr. Adeshina Afolayan, Dr. Sola Olorunyomi, among others; papers were also presented by 18 other humanists and scholars from diverse views (religious and non-religious).

The conference, which many considered a huge success on the part of the organizers, found the trio of late Prof. Olusegun Oladipo, Levi Fragell and Danladi Dele Agbeyo worthy of being honoured with different categories of awards for their contributions to humanism in Africa and the world at large.

The second and the third session of the conference which was about paper presentation started and ended as scheduled, and the conference came to a logical conclusion during the plenary session (with conference resolutions). 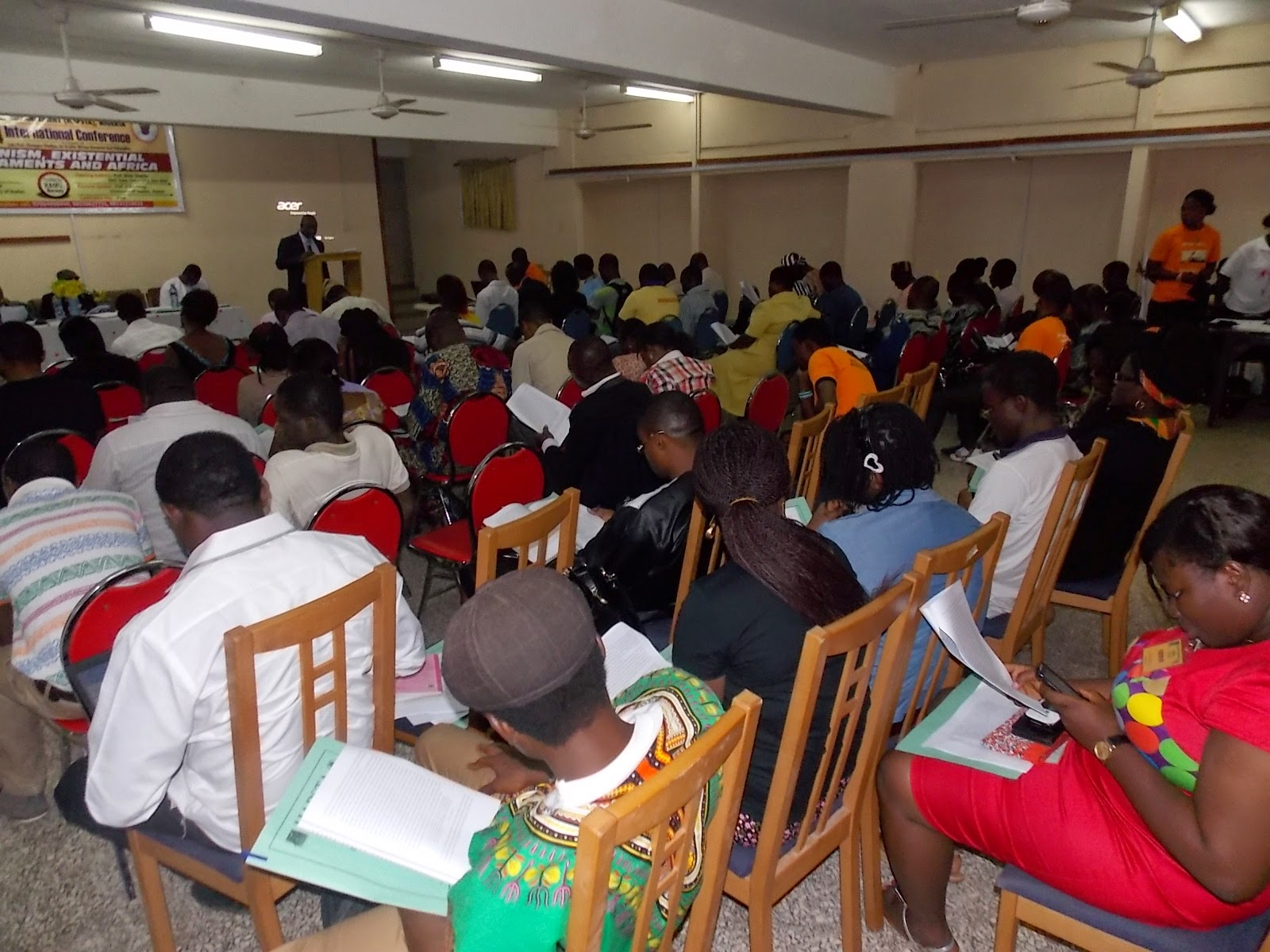 HAPSTA appreciates the participants and guests, and wished them safe trip back to their various destinations.

We do it for science, human rights and meaningful development

It is hard to imagine, but it is true, today, that cases of witch-hunting is still so commonplace in some African and Asian countries despite techno-scientific advancements. It is indeed a reality, a hard pill to swallow, that many children and aged women are still being subjected to humiliating conditions, and even killed sometimes, for being witches. The sanest questions, at this juncture, are: Who are the witches? What evidences do these attackers, nay killers, have and proven before attacking these victims of ignorance? And why accusing only the powerless segments of the society, children and women majorly? Obviously, we should not watch indifferently and allow this dastard act to continue.
Our fundamental goal as a team, the HAPSTA SCRIP Project, is to prevent a recurrence of happenings in the dark ages when many are tried and summarily executed at stakes for witchcraft allegations, in the contemporary period. We have therefore decided to be the VOICE of these VOICELESS children and aged, as well as their MEGAPHONE to other concerned global citizens.

The three cardinal focus of this project are:

The HAPSTA SCRIP Project is supported locally by humanists and human rights individuals and groups, and internationally by the Human Etisk Forbund, Oslo section, HEF, Central and the HAMU, all in Norway; and most recently by the African Unite Against Child Abuse, AFRUCA, UK .
Why not join us today? younghumanistsng@gmail.com
You can also check us out on the web: www.younghumanistasnetwork.net
www.hapstanigeria.net
https://www.facebook.com/hapstanigeria
HAPSTA_NG --twitter